A Study of Bias

HOW TIME AND NEWSWEEK COVERED THE HOME FRONT

On the weekend of October 21-22, 1967, after months of planning by numerous paid full-time organizers, 30 to 100 thousand anti-war protesters demonstrated in Washington.

On the same days as the march on the capitol, an all-volunteer movement, with half the lead-time, put together Operation Gratitude — a variety of events in 75 cities that stretched from the Pacific Ocean (Hawaii) to the Arctic Circle (Alaska) to the Caribbean Sea (Puerto Rico).

The biggest were centered in the New York City area — home base of both Newsweek and Time magazines — where hundreds of thousands took part in 5 parades, plus rallies, vigils and other displays of support for our men fighting in Vietnam.

Time’s entire cover introduced readers to nine (9) pages! about the anti-war movement and the activities in the capitol.

Newsweek gave two pages of coverage, with 6 pictures, to the protest in Washington.

Did they report the other side of the story?

Time  "balanced" its cover and 9 pages with a single sentence about Operation Gratitude! 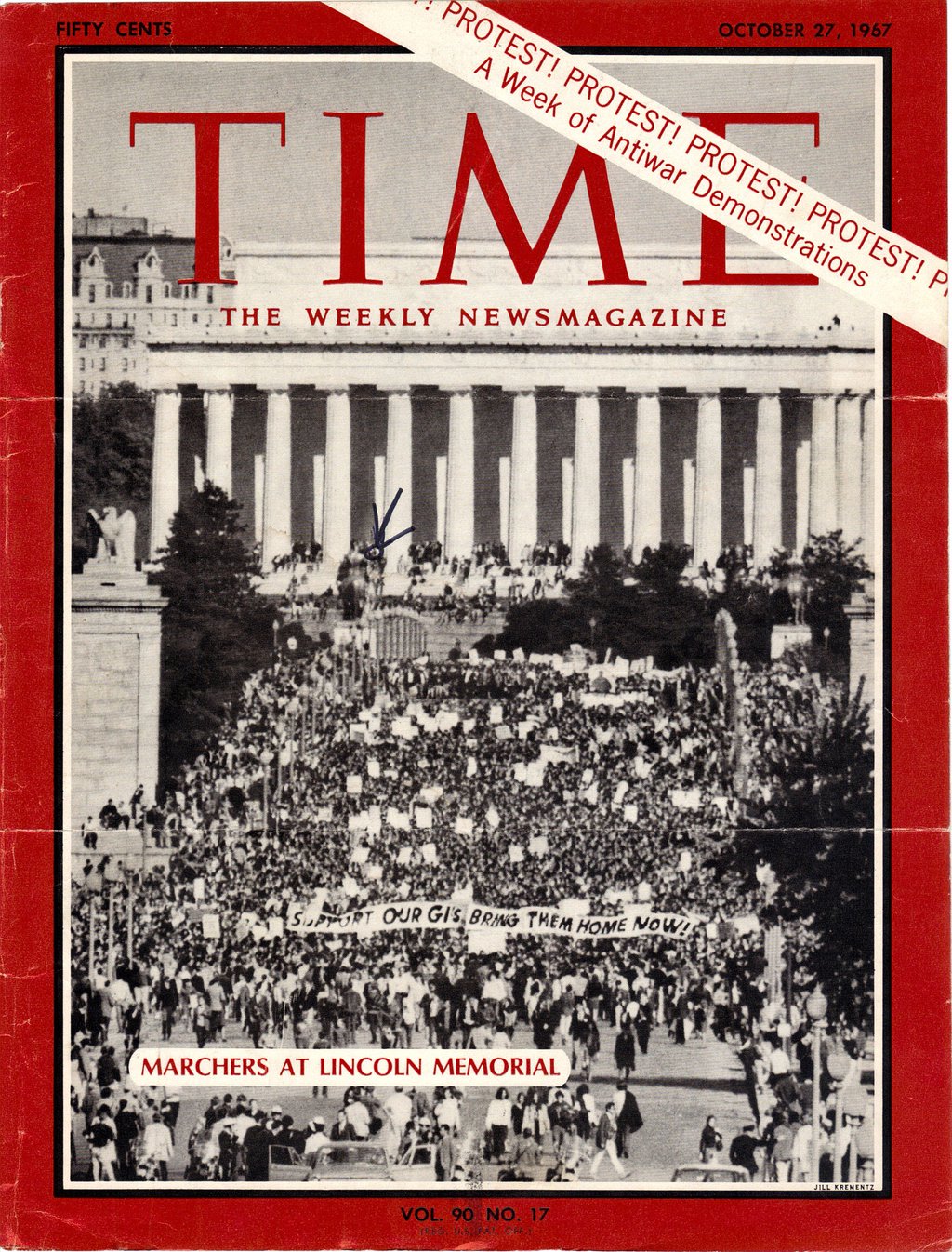 Hundreds of thousands ignored by most news media

The 31 words are buried within a paragraph – in the middle of the story – that begins with reports about Americans abroad demonstrating against the war.

“At home, thousands of Americans backed ‘Operation Gratitude,’ a grass-roots effort to show support of U.S. troops in Vietnam through all-night vigils and round-the-clock displays of lights.”

Hundreds of thousands, in the New York City area alone, reduced to grassroots effort to show support with vigils and light shows. No mention of the longest parade in the history of New Jersey – or those in the Bronx, Brooklyn, Long Island and Westchester.

Newsweek doubled the Time coverage to Two (2) sentences – buried deep in its story.

“Predictably, the antiwar demonstration begat a scattering of loyalist parades, vigils and religious services across the country, under the sponsorship of the National Committee for Responsible Patriotism (which posted messages of blessing from Richard Nixon and Barry Goldwater). In Battery Park at the tip of New York City, 2,000 people showed up for a two day vigil in support of Vietnam GI’s, and elsewhere motorists solemnly complied with a request by the patriotism group to drive with their headlights on as a show of sympathy.”

Americans who supported our fighting men were a “scattering” of  “begat loyalists” who “showed up and  solemnly complied” in a “show of sympathy.”   No indication that those who “solemnly complied” numbered in the hundreds of thousands.

Newsweek reported that NCRP “posted blessings” from Nixon (before he was president) and Goldwater. But, ignored the support from two thirds of state governors, hundreds of mayors and members of Congress, from both parties, plus entertainment and sports stars.

Although especially rare among the national publications and networks, a few in the news media did carry both sides.